“Over 3,000 metres up in the Himalayas in Nepal, far-flung  remote villages scratch a living from farming without any electricity or transport. Everything used for living has to be carried up the mountains on the backs of those people, including building materials. They are among some of the poorest people on earth. There is little in the way of educational and healthcare facilities in those high, remote regions.

Yangrima School in Sermathang in the Helambu region, about 80 km north-east of Kathmandu was opened by parents to provide an education for some of these mountain village children in 1985, although it took two years before a basic building could be provided by the villagers, supported by the Anthony Lunch Mondo Foundation. I spent a bit of time there in 2001 as a volunteer teacher.

Sadly, a few months after my visit, the school was bombed by Maoist terrorists. Undaunted, parents and volunteers worked for another 8 years to raise the funds to rebuild the school. It opened for the second time in 2009. Tragically however, it was destroyed yet again by the earthquake in May of 2015.

I am raising funds to help in the rebuilding of the school for the third time, something which is urgently needed to provide a place of safety for children orphaned by the earthquake and at risk of child trafficking. I have set up a dedicated bank account so that nothing whatever will be sliced off by Just Giving or any other fund raising pages, and every penny will be used by Yangrima School Trust in the rebuilding of the school.

I am delighted by the generosity of the December 2015 Hythe Community Cinema audience who, through buying the DVDs and through donations, have contributed a further £265.14 towards the rebuilding.”

Please click on the picture below to see the children singing the school song. 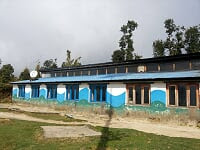 Assembly outdoors as there was no hall

The school now, after the earthquake